After raising a whopping $1,961,663 in their IndieGoGo campaign, Canary is set to launch. It’s a home securities system that is the size of a water bottle, and comes integrated with an app (so you can spend all day at work using the camera to spy on your dog).

The specs are amazing: an HD camera with a wide angle lens, microphone, motion detection, speaker, siren, and sensors for temperature, humidity, and air quality. The accompanying mobile app feeds live video and sensor data, sends you mobile alerts, and allows you to trigger the siren remotely or call the police from in-app. 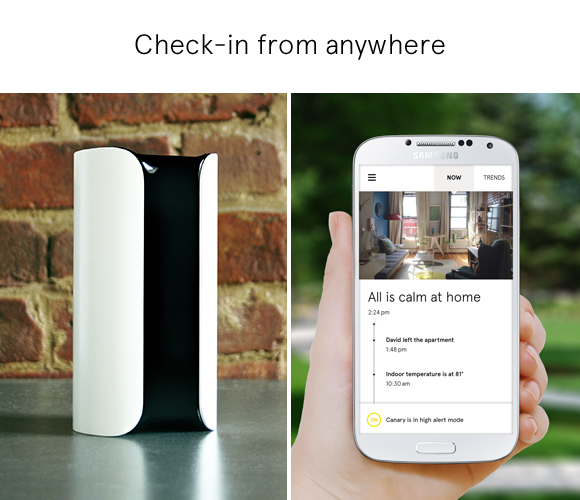 So, who actually needs all these features? Gone are the days of just locking your door and going on your merry way — no, now, your day must be punctuated by alerts that Canary is sensing odd movement in the apartment (no, that’s just your dog who knocked it over).

Canary even acknowledges that “false burglar alarm activations nation-wide are estimated at 99%…[As an example], in 2002 Seattle police responded to 24,505 alarms, of which only 325 were valid caused by a valid incident.” When burglaries do happen, it can cause a lot of damage — in 2013, the FBI reported that the average dollar loss for victims was $2,230. However, they also reported that over ten years (2009-2013), the instances of burglaries decrease 16.3%.

The price point, however, helps Canary feel more realistic. $119 feels affordable compared to the cost of installing a more traditional home securities system. Canary has the added bonus of being feasible for renters; since it is not integrated into the space with wires and plugs and tons of hoopla, when you move, it can easily move with you. Another bonus is that it is a smart system, so apparently, it gets to know you and then gets better “at protecting your home.”

Well, if you’re a mob boss or paranoid that your roommates are going through your stuff when you’re not around, Canary is the affordable, smart, and super aesthetic option for you! The Canary website says “the unknown can be scary, but no one should be afraid to come home.” I didn’t realize I was suppose to be terrified of coming back to the same clothes-on-the-floor, dog-on-the-couch apartment that I left in the morning.