Is Chipotle, the Google of fastfood? It is a strange comparison but let me explain. Both companies in comparison to their competitors operate on a higher level. It is extremely rare that they mess up on a news-worthy degree and both seem to be completely immune to the public controversies that other large companies face on a weekly basis. The most important trait, however, that Google and Chipotle share, is that they always seem to be one step ahead of their peers. That being said, let me introduce you to Chipotle’s most recent step forward; it is the revamp of there new app. BRIAN X. CHEN and JENNA WORTHAM explain how the app works best in their article for the NYTimes:

The lingering problem with mobile payments is that it’s usually no more convenient to pay with a phone instead of cash or credit card. Square’s wallet, for example, a feature that promises to let you pay simply by saying your name at the register of participating businesses, is clunky and has rarely worked when we have tried. 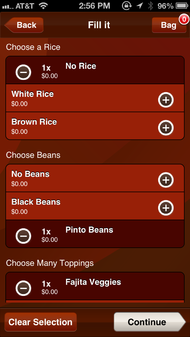 But a recent trip to a franchise of Chipotle Mexican Grill in Manhattan was a rare and shining moment where paying with a phone was frictionless and actually sped things up.

Here in New York, where good, inexpensive meals tend to be scarce, we have made it a weekly ritual to pick up lunch at either of the nearby Chipotle restaurants, where lines are so long they pop out the door. The process of ordering, choosing meat, rice and toppings, filling up a soda and paying, as well as walking to and from the restaurant, takes roughly an hour.

Lo and behold, Chipotle recently updated its smartphone app for the first time in four years, so we gave it a try. Using the app, we ordered a burrito with barbacoa, cheese, sour cream, lettuce and two kinds of salsa, and a burrito bowl, with chicken and vegetables, all three salsas, beans, guacamole and no rice. One of us (Brian) quickly created an account and entered the credit card information to pay, and the app said to pick up our order in 40 minutes. Around that time, we walked to the restaurant, skipped the long line and asked for the order the counter. Our order was brought to us in a takeout bag.

The results? Everything about the order was correct. We spent 45 minutes grabbing lunch, including the wait, saving precious time. We made no compromise in how we customized our meals; in fact, before using the app we didn’t know we could order more than one kind of salsa. And we didn’t look like tech nerds because all we did was roll up to the front of the line, just like flying first class.

Compare that with the typical mobile payment experience, where you walk into a coffee shop or restaurant, order and load a bar code on the screen, and scan it to pay. Not much time is saved. Sometimes scanning the bar code doesn’t work the first time; paying with cash is faster. Nothing fundamentally changed about the experience. It’s no wonder, despite all the hype, that mobile payments haven’t taken off at all.