HTC’s fans await exciting updates as the company plans to unveil its next-generation flagship Smartphone in the coming days. From all indications, the new HTC One Gold will be a continuation from last year’s HTC One, but it is believed the latest version features better enhancements and tweaks. The 2014 HTC One images have been leaked by @evleaks and display a dual-camera set-up on the rear end. It also features luxurious gold color and stereo BoomSound speakers.

Another novelty to be spotted on the outside is a dual-color flash, which again, emphasizes HTC’s mantra of becoming a leader in mobile photography. If the images are anything to go by, the new 2014 HTC One Gold is quite similar to the HTC One except for the camera system improvements. 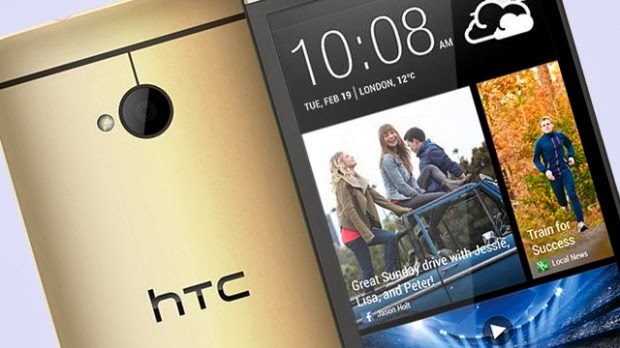 For instance, the press shot in the new version is similar to the aluminum device released by HTC last year. But the major distinctive feature is the twin camera—which includes a larger primary camera found on the back and a smaller one found at the top end of the case. It is also believed that the new HTC One Gold phone’s camera has been integrated with twin camera sensors to offer more advanced photography options.

It is evident, therefore, that HTC has decided to focus, exclusively, on camera quality with the new One. This is clearly meant to differentiate it from its competitors such as Apple and Samsung. Another prominent feature seen on the leaked images is the home screen interface that looks like Windows Phone 8′s UI.

Many customers are excited to see if HTC comes up with yet another revolutionary product to stay on top of the game!