There have been a lot of speculations as what to expect from mobile in the year 2018. What will be the fate of the mobile world in 2018? Well, it’s great news ahead. We have mobile world booming in the next four years. Let us look at the statistical report by Cisco.

In 2013, about 58% of global population uses mobile phones. This number will swell up to around 64% in the year 2018. The world population after four years will be around 400 million, and out of it, mobile video will denote about 69% of international mobile traffic. It is a massive surge as compared to 53% in the current year as reported by Cisco, covered by Business Insider.

In the Middle Eastern nations, as well as, in African nations, the rates for mobile revenue will increase the maximum. These regions have recorded their mobile data traffic by more than 100% surge in 2013.

4G will have greater coverage over geographical regions in the next four year cycle. The 4G customer also uses more of data. It is also estimated in reports that 4G will be about 15% of total mobile connections and more and more people will be using 4G. In fact, the mobile traffic will be 51% from 4G connections in 2018.

The greatest boost will be the speed of internet on Smartphones. Well, it is also predicted that Smartphones would work as fast as fixed broadband in terms of mobile data speeds. This can soon become a reality by the mid-2015 itself. 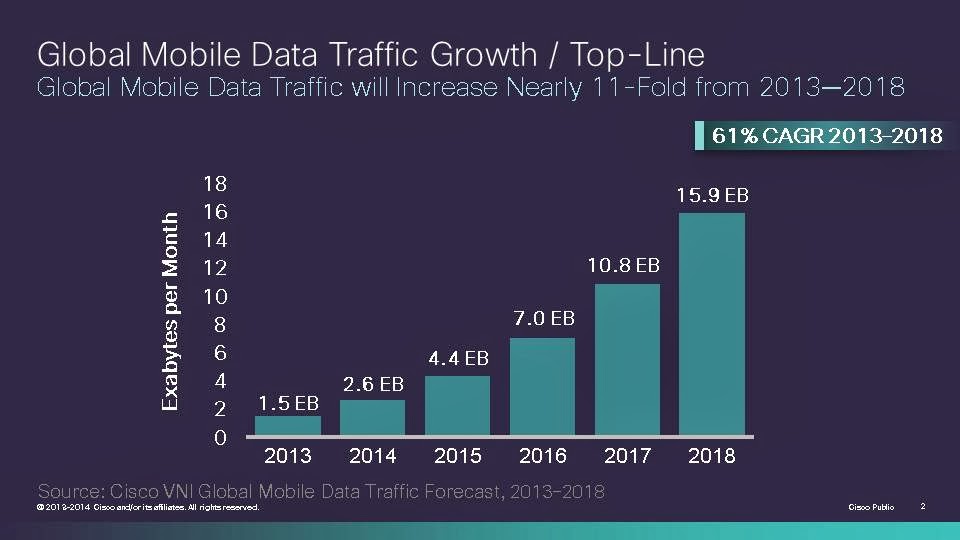 The most important forecast for mobile data in the year 2018 is the entire volume of data traffic on mobile phones. In 2018, it will have increased almost 11 times than in 2013 as data traffic will reach 190 Exabyte’s per year, extremely enormous size of data. That’s the size of approximate four trillion videos or 42 trillion pictures sent or received from mobile phones. That’s extremely massive!

Generally, the citizens prefer Wi-Fi services when they get it. Many of the world’s greatest cities will have a Wi-Fi system in place. In 2018, more data will be offloaded from through Wi-Fi from mobile set-ups than mobile operators themselves.