Twitter recently appears to be testing a new process for sign-up that is based on mobile. The moving news is that the Twitter users will be directed from Web to mobile applications. Why the Twitter took this step? The social media are afloat with buzzes that although it can be called as experimentation, it might also be due to its user-growth teething troubles.

The stocks of the micro – blogging site fell dramatically to 18 percent, even though it managed to garner about $0.02 non-GAAP profit, in its first quarter as an open (read: public) corporation.

Also, the celebrity bread-butter website extended only 9 million regular active members per month in the last quarter of 2013, but the active user base shows strong signs of growth. It grew about to 30 percent on  year-over-year statistics. The numbers suggest that, by the last quarter of 2013, Twitter had a user base of around 241 million, making it one of the top largest social networks in the world along with the likes of Facebook. But overall, it is something not right with the numbers as it is not up to expectations. 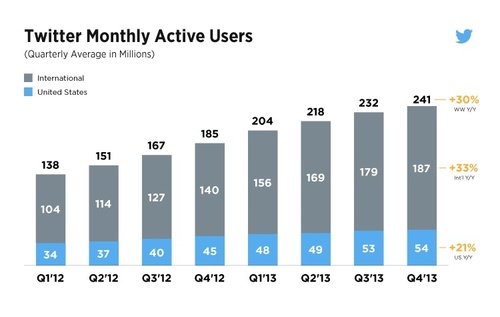 According to the progress-graph provided by Twitter, it shows that user growth fell slipping during that quarter. In 2013, the three-month growth from the third quarter (Q3) to the fourth quarter (Q4) was less than 4%. This is an alarming sign for Twitter as it had about good 10 percent growth in the same quarter in year 2012, is an indication that the significant hold on the social media market share is slipping.

The Twitter CEO Dick Costolo defended the discouraging developments by commenting that the company is focused on improving the on-board experience by targeting ‘native mobile sign-ups’.  He also noted that the numbers will oscillate a bit as the corporation is experimenting with their product and there’s nothing to worry.

These experiments include the above mentioned Mobile-Only Sign-Ups on Twitter. Well, it appears that it is a region based as of current proceedings. For instance, in New Zealand, the new Twitter sign-ups were directed to iPhone and Android apps. Many users from the province also complained that they were unable to sign-up for Twitter if they accessed it via desktop. The website instead takes users to a new page that says “Go Get the App” for making an account on Twitter. Well, the experimentation seems to be region based since visiting the website through VPN by US IP address provides regular sign-up on the web.

Denmark is also the country where this experiment was reported to be implemented. The Nordic Web founder Neil S W Murray reported about the Denmark experiment.

His February 6th Twitter handle reads, “Also in Denmark for the past 2 months or so as an FYI. And, if you already have the application and an account, you cannot sign up all over again…”

Thus, twitter is trying to implement its strategy targeting mobile users. In an IPO filing last year, Twitter acknowledged the prominence of its mobile promoting plan.

“Mobile is now the basic source of our business. The users want everything that was only available on the desktop before onto mobile phones as they are more convenient on-the-go. The 140 word limitation of a Tweet message is our institutional standard of Twitter and that was our core idea while building Twitter. Thus, we embrace that the user interface that is user friendly to all across all platforms.”

To acquire newbie’s, new users only through mobile sign-ups may be criticized by some experts, but mobile signing up may require more steps to the make that process easy and user-friendly, perhaps it assures that Twitter can create the paramount first impression on its new users. We can only hope this strategy works for Twitter, and it can reflect in the next quarterly statistics.